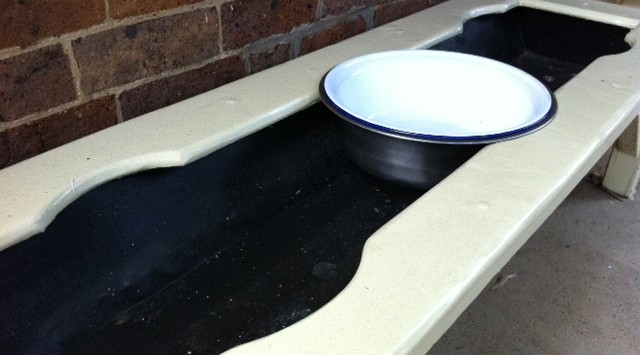 Some of our young visitors are interested in ‘the facilities’ of North Ryde PS in the very early school days. The plans of the 1877 schoolroom show that the ‘lavatory’ was located along the closed end of the open veranda (which now faces the driveway). Lavatories in those days were wash areas whereas the toilet […]

Since World War I, North Ryde Public School has had a Memorial Rose Garden. The rose garden has been located in different places within the school grounds over the years and was used as a focus for ANZAC Day services. This photo of the NRPS Red Cross was taken in in the rose garden in1930. […]

In memory of the North Ryde PS boys

North Ryde PS ex-student, Captain Claude Elmhurst Benson’s name sits at the top of the North Ryde PS WWI Honour Board on display in the Schoolhouse Museum. Born in 1887, Claude grew up in ‘Bensonville’ Lane Cove Rd, North Ryde. He was a diligent pupil receiving dux of the school in 1897 and the prize […]

There is a sinking circular depression in the grass on the low side of the museum’s wooden building. Each year it seems to descend a bit lower. This building stands on the site of the school’s original schoolmaster’s residence, a brick four-room cottage (shown below), which, sadly, was demolished in the1960s. We think the circular […]

Mr Crew was appointed as the first teacher at North Ryde Public School, originally called City View PS, in 1878, having previously taught at Goulburn Church of England School. A total of 45 pupils were enrolled and increased to 53 in the first week. There were, however, frequent absences because farming families were dependant on […]

A stroll in North Ryde in the past

Imagine time travelling back to the early 1900s in North Ryde. If you strolled down Cox’s Road from the school and turned right into Wicks Road you would have walked beside paddocks and orchards and had views across to the city. It is claimed that with binoculars you would have been able to read the […]

Did you know that when North Ryde PS was built in 1877 the area was orchards and farmland and contained several sandstone quarries? The stone footings were quarried locally for the single North Ryde PS schoolroom, now the NSW Schoolhouse Museum. An advertisement appeared in the Sydney Morning Herald on Saturday 30th November 1878 advertising […]