Home » NSW Schools and the ANZACs

NSW Schools and the ANZACs

As fathers, brothers, teachers and neighbours left to fight the Great War, NSW school pupils took an active role in the war effort back home.

Following the Anzac landings and devastation in Belgium and France, in the lead-up to Empire Day 24th May 1915, NSW public schools were urged to raise funds for the Belgian orphans through the Children’s Ten Thousand Fund. The Minister of Public Instruction encouraged each child to donate a shilling with the aim of raising £10 000. Taken enthusiastically on board, the children of NSW schools raised £29 500, an incredible effort for the time! The top 100 schools received a beautifully coloured certificate acknowledging their contribution. For more information read the Nepean Times article published on 22 May 1915 on Trove.

Building on empathy with the French and Belgian orphans, NSW school children donated food, made clothing, grew vegetables and held concerts and gala days to fundraise for them and other funds such as the Australian Comforts Fund.

Programs of school fundraising activities were published in the education gazettes and local newspapers, spreading ideas for raising funds and encouraging participation.

Throughout the war, schools were also fast to respond to the call for items when there were shortages such as bandages, muslin for dressings, sand bags and scrap metal.

Empire Day, held annually on 24th May (Queen Victoria’s birthday), was celebrated in Australian schools from 1905. A half day holiday, there were large community picnics, sports days, street parades, pageants and tableaus. To form a tableau, children proudly dressed in costumes representing the countries of the British Empire, held flags and gathered around a central child dressed as Britannia who wore a Corinthian  helmet and carried a shield covered in a Union Jack flag and a three-pronged spear (trident).

Empire Day 1915 was the first to be held in wartime and allegiance to the British Empire was strong. In tableaus during the First World War, children also dressed in Red Cross uniforms and dressed as soldiers.

The war featured heavily in school life throughout both world wars. In the First World War, daily morning or weekly school assemblies paid respects to those at war. In a period of great patriotism to the British Empire, students sang hymns and recited prayers for the soldiers, sang the national anthem and patriotic songs, recited pledges and saluted the flag. Hymns included Hymn for the Soldiers and a common prayer was Prayer for Peace.

Students made comfort items to send to soldiers at the front such as knitted socks, balaclavas, scarves and handkerchiefs. When wool ran out, students spun wool using various methods such as spinning wheels and drop spindles, dyed and knitted it. They tucked short messages of support into the items and packed them up and took them to the post office for mailing. Efforts were recognised through articles and photographs in The School Magazine and The Public Instruction and Education Gazettes as was recognition of those serving.

As the war continued into 1917 and 1918, families whose ‘breadwinners’ were fighting overseas, or had returned wounded, struggled to make ends meet. A Fruit and Vegetable Fund was established and school students were encouraged, through The School Magazine, to grow vegetables that would be distributed to these families.

Some schools established vegetable gardens and made regular contributions. Students were also encouraged to grow vegetables at home for the fund, even by growing one vegetable in ‘an old kerosene tin’. The harvest of Wyong Creek PS at Yarramalong features in the image at the top of this page and below.

Lessons about the war were embedded into school days and being in the period of ‘the new education’, methods such as mapping, sand trays and 3D models were used to help students gain an understanding of the location and geography of Gallipoli and components of military camps.

Students also wrote compositions on topics such as ‘What I can do towards winning the war’ and calculated arithmetic problems using war supplies facts and figures. Lesson suggestions were published in the education gazettes.

From July 1911 all boys and men aged 12 to 25 years were required by Federal law to undertake military training. Australia was the only English-speaking country to have compulsory training during peace time and the scheme operated until November 1929. (Junior Cadets ceased July 1922.)

Boys aged 12 to 14 were Junior Cadets and undertook compulsory military training at school, taught by school teachers. Junior Cadet training included the compulsory subjects of physical exercises and squad drill. Proficiency in one of miniature rifle shooting, swimming, first aid or running exercises within organised games also had to be demonstrated by Junior Cadets.

Exercises, drills and methods of instruction were prescribed in the Australian Military Forces Junior Cadet Training Textbook, 1916. Teachers could undertake special instruction in how to train Junior Cadets.  If proficient, the men could hold rank within the Junior Cadet scheme as teacher-officers.

In NSW public schools at the start of the scheme, Junior Cadets undertook 15 minutes physical activity on four days of the week and 30 minutes of drill on one day. Girls and boys under 12 years usually participated in this as well. Daily physical training was intended to build a strong, fit and moral nation. ‘In bringing the body into the highest state of physical perfection various moral qualities are brought into play.’ (Goulburn Evening Penny Post, 20-7-1915). Physical training included both exercises and organised games to enable both strong and weak students to fully participate.

Boys aged 15 to 17 were required to register as Senior Cadets and men aged 18 to 25 registered for the Citizen Military Force. They undertook military training at their local parade ground or drill hall twice weekly and attended camps. Fines and imprisonment were imposed for bad conduct or ‘drill shirking’.

Find out more in the learning resource – At School at War: NSW School Children and the Anzacs.

At School At War Program

To mark the Centenary of Anzac and recognise those who served in the First World War the NSW Schoolhouse Museum offers a unique  At School At War  program suitable for Stage 2 students and Years 7-10 Life Skills students.

Based entirely around primary sources from 1915 to 1918 including the first School Magazine, The Public Instruction Gazette, photographs and other images, students will undertake a range of genuine hands-on activities in an authentic 1900s school setting.

Download the At School At War flier. Go to the supporting learning resource – NSW School Children and the Anzacs.

At School At War program

Immerse your students into the home front during WW1.

Visit the At School At War page.

At School At War 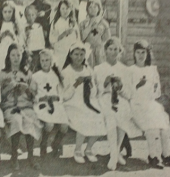 Put people to the names 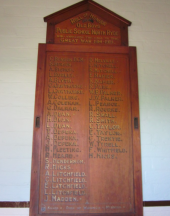 Bring your school honour board or local war memorial to life!

How to research a WW1 soldier

Meticulously researched and written in the 1950s by ex-teacher and WW1 soldier, Thomas White, Part 1, from page 348, describes WW1 contributions made by NSW public school students and staff.