The brick buildings of the NSW Schoolhouse Museum are the first school buildings of North Ryde Public School, dating back to 1877. Following lobbying by the local community, the school started as a single schoolroom with separate teacher’s residence built on one acre of land donated by Richard Wicks in 1877. The school, named City View Public School, opened on the 25th January 1878 to 45 pupils taught by teacher, Charles Crew. Its name changed to North Ryde Public School in 1879.

By the early 1890s up to 76 pupils were crowded into the single schoolroom so a second room was added in 1893. Two more rooms were added in 1910 as the school population reached 133. Extra playing area was also acquired, from Mr W J Cox.

Over the years the 1877 and 1893 rooms had various uses such as library, staffroom and headmaster’s office while the 1910 rooms were used as classrooms until 1985. The teacher’s residence was demolished in the 1960s.

In 1986 the rooms were converted to district offices for the Department of Education and when they were vacated, school and community members successfully lobbied to preserve the buildings and establish a museum. The Historic Building Group of the Government Architect’s Branch described the buildings as ‘a fine example of the sequential architectural and educational development of the basic schoolroom and classroom buildings over the periods from 1877 to 1910’.

The building and rooms were restored by a group of volunteers during 1992 using the original plans. The museum officially opened in November 1992 by the  Minister for Education at the time, the Hon. Virginia Chadwick.

The Wallumedegal Peoples of the Darug Nation are the Traditional Owners of the land on which NSW Schoolhouse Museum and North Ryde Public School stand. The word Wallumedegal, also spelt Wallumattagal, probably derived from the word ‘wallumai’ meaning snapper fish and ‘matta’ meaning place, often a water place. Devastatingly, most of the population was decimated by the smallpox epidemic of 1789 but Aboriginal culture survived and continues.

We acknowledge the Wallumedegal Peoples of the Darug Nation and pay our respect to Elders past and present. We acknowledge and respect the continuation of cultural, spiritual and educational practices of Aboriginal and Torres Strait Islander Peoples on this land. 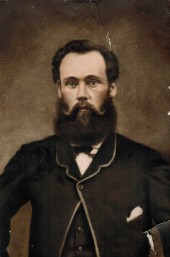 When the school opened on the 25th January 1878, teacher Charles Crew taught the inaugural class of 45 pupils, which increased to 53 within the first week. He died of a lung infection on 11th August 1880, aged 36, leaving a wife and 6 children. This 1878 newspaper article reports on his appointment.

About the NSW Schoolhouse Museum

A description of Heard’s Farm appeared in the Cumberland Argus and Fruitgrower’s Advocate on 6 November, 1902. Heard’s cottages still stand on the corner of Cox’s and Wicks Roads.