Miss Dorothy Kenning was born in 1924 in Belmore. Her family moved to Putney, then Wicks Road, North Ryde for her last two years of primary school. In 6th Grade in 1936 Miss Kenning was awarded a medal for being Dux of North Ryde Public School.

In 1935 and 1936, North Ryde Public School consisted of the original 1877 building and the 1893 and 1910 extensions. These original classrooms form the Schoolhouse Museum as it is today. There was also a residence for Mr Thomas Hamilton, the Principal, and the lovely memorial rose garden.

Miss Kenning told me that there were two classes in each room. Miss Bryce taught Kindergarten and Transition, while Miss Benson taught 1st and 2nd Class. In one of the 1910 rooms were 3rd and 4th Class, and in the other room 5th and 6th Class, where Miss Kenning was taught by Mr Hamilton.

Mr Hamilton taught traditional copperplate writing, using pen and ink. The pupils only had one exercise book and the main subjects were reading, writing, arithmetic, spelling and history.

Miss Kennng said the girls also had to learn sewing, completing samplers of different stitches. She said knitting later became one of her hobbies.

Dorothy Kenning’s Dux Medal awarded in 1936 as Dux of North Ryde Public School. The medal is metal and about the size of a 20 cent piece. Dux Medal (2000-53)

Miss Kenning used to walk to school through fields and orchards, her hair in plaits, carrying a little leather school case. In the playground Miss Kenning played hopscotch, rounders and other ball games, and skipping.

In those days the playground was mostly dirt, with few trees and little grass.

School uniforms were not compulsory, but Miss kenning said she mostly wore a dark blue tunic over a white blouse, with white socks and black shoes.

The girls often wore their Red Cross uniforms, consisting of a white apron and veil with a red cross on the front. The girls tended the rose garden, which was a memorial to the former school students killed in the First World War.

There was no formal homework set, so Miss Kenning was often free to catch tadpoles in the creek at the back of her house, but only after she had finished her chores. On weekends, she attended the Girl Guides, in Coxs barn.

Sunday School was at St Johns Church on Sunday afternoon, and the church service was held in the evening.

In 1997 Miss Kenning kindly donated her beautiful gold and silver Dux Medal to the NSW Schoolhouse Museum where it is a prized part of the collection.

Miss Kenning continued living in North Ryde as an active member of the community until her passing in April 2018 at the age of 93 years. 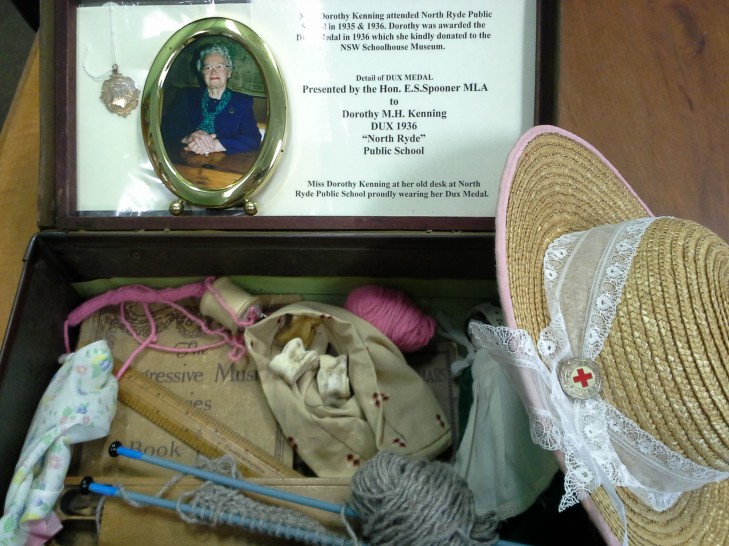 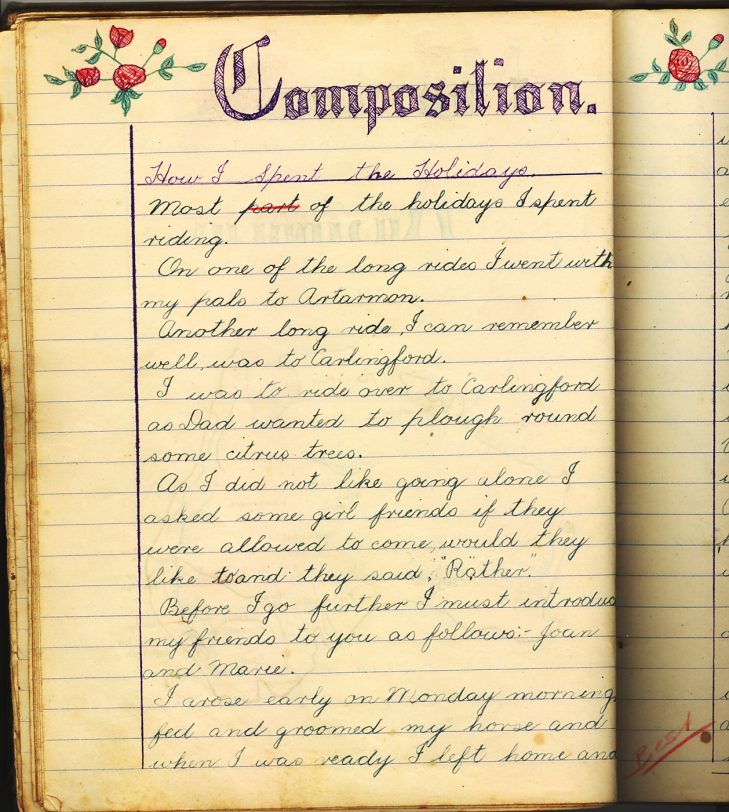 In a composition Jean recounts a ride to Carlingford on horseback in September 1933.