Dianne Robertson and Robyn Minard attended North Ryde Public School in the 1950s and 1960s. In this oral history they recount their memories of their school subjects and lessons.

There appears to be quite a few similarities between subjects studied in the 1960’s to modern day. We were constantly graded on our neatness, conduct and attitude which reflected in our bookwork and home assignments. You would possibly call it ‘effort’ these days.

One of many subjects that inspired us was social studies during which we were taught the history and geography of Australia. Drawing a map of Australia freehand was a regular task set by our teacher. We even had to include all the rivers, the states and their borders, capital cities and mountain ranges all from memory.

The most rewarding part was finishing off our maps by colouring in the blue sea all around the coastline. It looked a bit like a fringe. We also studied the world that lay beyond the Australian coastline such as world explorers and the history of Great Britain.

Social studies books from the 1960s showing maps of Tasmania. All public schools followed the same syllabus as shown in the three examples.

Memorising Australian poetry and chanting it repeatedly has created lifelong memories. My sister and I are still capable of reciting stanzas from William Wordsworth’s poem ‘Daffodils’ and Henry Kendall’s ‘Bell Birds’ to this very day!

During arithmetic we were regularly tested every Friday on both our mental and written ability. In mental arithmetic we were taught to calculate answers in our head! For example, how many dozens in 48 apples? Or how many wheels on nine cars? Not forgetting how often we chanted our times tables!

Not much has changed in regard to English.  We were taught reading, spelling, writing, composition and comprehension.

Composition required the ability to compose a story and comprehension means how much of what you read did you comprehend? It’s really just another word for ‘understand’.

We certainly understood and can recall one of our favourite infants stories entitled ‘The Rolling Plum’. How worried we were as the plum rolled up and down hills to escape the clutches of a group of children in pursuit. Fortunately, the plum survived.

Art, music, natural science, library and singing using the ABC Broadcast books as a guide were a great balance to our other subjects.

Physical education, which is just another name for sport, included energetic sessions of folk dancing out in the playground. With plenty of side slipping, polka and skipping in a circle or groups of eights, accompanied by music played through a huge loudspeaker which hung from the eves outside our classroom, folk dancing was such good fun.

At times the girls were separated from the boys for certain subjects. The boys would go to a room which was set up for woodwork or basket weaving and the girls went to the needlework room for sewing. We attended these challenging but enjoyable subjects in primary school.

We have fond memories of our needlework classes. The excitement would start the night before as we packed our sewing baskets with needles, thimbles, coloured cotton threads and our latest work piece. Off to school we would go with a Globite suitcase in one hand and our needlework basket swinging in the other.

The only downside to such an exciting subject was the fact that we were all learning hand sewing which the teacher had to closely monitor. Hence, we could only hand sew one row of stitching at a time then line up at the front of the class with all the other girls and have that row checked before moving on to a second row. There was a lot of waiting but the good news is, to this day we are still sewing.

Dianne and Robyn recount map making and creating pages in their social studies books in the 1960s. 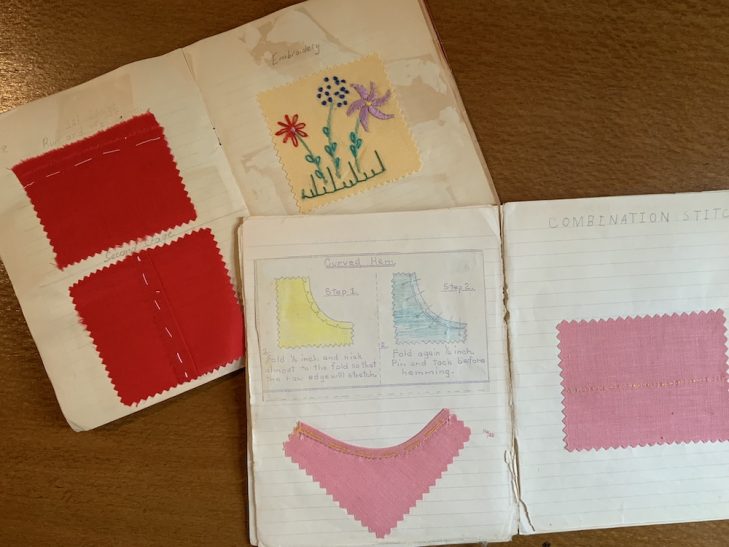 Dianne shows items she and other girls made in sewing lessons in the 1960s.

Robyn’s school sewing basket was given to her by her parents when she was 10 years old.