Dianne Robertson and Robyn Minard attended North Ryde Public School in the 1950s and 1960s. In this oral history they recount their memories of the various monitors in the primary grades of school.

What a privilege it was and how proud we felt to be granted the duty of class monitor by our teacher. The class had different monitors for different activities during the school day so we took turns. If chosen, the monitor was required to display eagerness and reliability.

Sports lessons were full of surprises, different sporting activities on different weeks and we often practised skills for our sports carnival. We had a variety of equipment kept in the sports storeroom managed by sports monitors who had to display diligence and responsibility.

Prior to our lesson, the sports monitors would be instructed by the class teacher to assemble the sports equipment from the sports store, be it balls, bats or whatever was required for that particular lesson and make sure everything was readily available, thus not wasting valuable learning time. Once the lesson was completed the most important task of the monitors was to put the equipment away and correctly place everything in its original position.

The wash shed contains taps and bubblers in long concrete troughs. Monitors supervised their use.

Wash sheds were a common sight in the 1960s where pupils could easily access bubblers and hand washing facilities. The shed, which was a short distance from the toilet block, was designed with an open-air feel having concrete troughs and huge gaps in the vertical timber paling walls.

It was through these gaps that the wash shed monitor, usually a senior pupil, could keep an eye on everyone inside. They watched to ensure that the bubblers weren’t left running or sprayed too high up the wall. They made sure the girls weren’t taking too long to wash their hands by rubbing cakes of soap on the concrete then vigorously rubbing their hands onto it. This was a great idea for soft clean hands but a bad idea as a queue would soon form and the monitors would then have to take control.

Robyn recalls the library as a calm place of whispered voices and patient books.

The library monitor was required to assist the librarian on their class library days. Mrs Woodgate was our library teacher and our library was a magnificent modern designed building filled with numerous books adorning the shelves patiently waiting to be borrowed. The monitor required concentration and commitment in this important job of assisting the library teacher when the students came to return their book and borrow another book for that week.

Slotted in the back of every book in an allocated pocket was a borrowing card stamped with the next weeks return date. The library card was taken out of the pocket, updated and when that information card was completed, the card was gently slotted back into its pocket at the back of the book.

The library was always a place of whispered voices and ever so calming. Library day was magical and no one ever forgot to return their book on that special day.

The borrower’s name, class and date was written on the card in the envelope and filed at the library. The due date was stamped on the slip pasted in the book.

To improve the nutritional health of children, in the late 1940s the government initiated a free milk program to address the perceived shortfall in the dairy intake of many school aged children. Each child received one third of a pint of milk in a glass bottle every school day. Every morning the milkman delivered the milk bottles in metal crates to the school grounds.

The responsibility of the milk monitor, undertaken with such eagerness, was to deliver each of the crates containing the glass bottles of milk to every individual classroom to be consumed at playlunch, now known as recess. One of the milk monitors to take his turn was a student named Jimmy who brought his own billycart to school to assist him in the delivery of the crates of milk. This made it easier for him as he trundled down the path to another part of the school.

As the milk was always left outside the cheeky magpies would sometimes peck the silver foil lids, we think to try and drink the delicious creamy top milk in the bottle, or was it the reflection of the silver foil lid that attracted them. However, we do remember drinking chilled milk during winter and warm milk during summer. 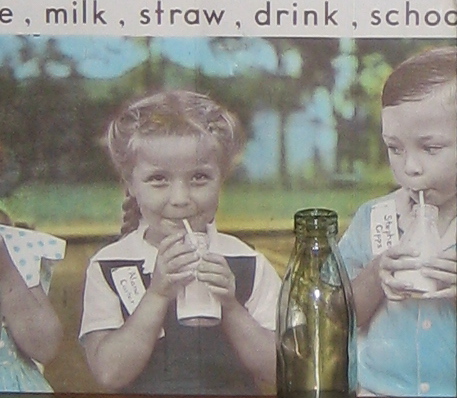 Wooden milk puzzle for infants grades. From the 1940s to 1970s milk was promoted as a healthy food choice.

Some schools had brick and concrete milk shelters at the front of the school.

They were designed to keep the milk cool between delivery and consumption. 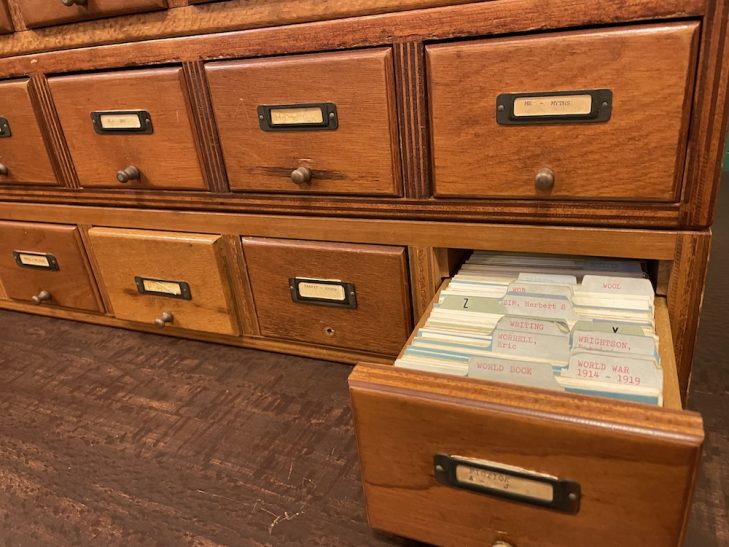 Before computers the library catalogue was a set of cards, each with the book title, author and call number.

Housed in wooden drawers, the cards were arranged alphabetically or by Dewey number.