Before video games and virtual reality headsets, even before the View-Masters of the 1940s and 3D movies of 1950s drive-ins, there were stereoscopes. These were used to look at twin stereoscopic photographs – stereographs – taken by a double lens camera, mimicking the way two eyes create depth of vision. The viewer magnifies the two photos and the eyes merge them together to create a 3D image. Because it hugs around the eyes the rest of the world is blocked out immersing the viewer in the photo.

Using these stereographs we can look through two eyes into the past. Our perspective on this world is through the eyes of John Saunders Middenway, a public education teacher and headmaster, amateur botanist and composer, creator of now-lost lantern slides, and these rare stereoscopic images.

What did he see?

John and Grace Middenway are posed at long tom desks at Bexley Public School, circa 1895. They are using slates and slate pencils and have their wooden pencil box on the desk. Stereograph – Kept in (2000-911)

John Saunders Middenway began his 48 year teaching career in 1869 as a pupil-teacher in Paddington Public School, Sydney. Senior pupils of at least 13 years of age could do a five year apprenticeship as pupil teachers. In 1874 he was promoted to Assistant Teacher at Paddington and six months later he married Sarah Elizabeth Venteman of Woolloomooloo.

The young Middenway family, including baby Francis, moved to Clarence Town in the Hunter district for John to become headmaster, where Sarah gave birth to Gerritt (Dick) and Arthur. They moved on to Greta, also in the Hunter, in the year after the 1880 Public Instruction Act legislated that education in the colony should be free, secular, and compulsory. Schools in the popular Gothic-influenced style of George Mansfield, with large windows to provide light for reading, flourished in consequence and the Middenways were on the crest of that wave of education.

The family was sprouting as profusely as schools in the colony – Ada, Albert, Fred and Grace were all born in the early 1880s. Sadly, baby Albert died the year he was born and little Fred died of diphtheria in his grandparents’ home in Woolloomooloo aged two years and eight months.

But if children can break a heart, they can also fill it with pride. In 1890 14 year old Frank followed in his father’s footsteps to become a pupil-teacher, the start of his own fifty year career.

Becoming headmaster of Wagga Wagga Superior Public School in 1892 must have been a vote of confidence in JS Middenway’s abilities. Superior Public Schools provided both primary and post-primary education from 1881 until 1931 for both boys and girls, taught in separate and discreet groups.

When we look at the image of young men there is a mix of ages and of town and country in their hats and ties (no such thing as school uniforms), and the outward swagger of teenage boys that doesn’t change through the ages.

Lake Albert Public School and teacher’s residence, circa 1892. John is visiting with Ada and Gerritt. The other two adults in the image could be teaching staff of Lake Albert.  Stereograph – Public School Lake Albert Wagga (2000-904)

The teacher was provided with a house, often with four rooms, attached to the school, as we can see in the image of the Lake Albert schoolhouse. Heavy stereoscopic cameras were set up on tripods. Perhaps John’s wife Sarah accompanied John on the visit to Lake Albert and took the photograph.

The role of teacher’s wife was a position in itself, and a male teacher’s career was significantly impacted by the wife he chose. For JS Middenway’s career to flourish as it did, Sarah probably would have contributed to his reputation in the community, as well meeting the requirement to teach sewing for four unpaid hours each week to the girls in his school.

The Middenway’s garden with hollyhocks growing high between Grace on the far left with an older student. In the centre to the rear are John and his wife Sarah, holding baby John (Jack), with perhaps Ada on the left of John and Gerritt in front of Sara. Wagga Wagga circa 1893. View the larger image on EHive to spot the other school children in the photo – Stereograph – Wagga Teachers Residence S.P.S. (2000-903)

Improving the school grounds was an expectation by the department and teachers were encouraged to plant and maintain both decorative and productive fruit and vegetable gardens to help feed the teacher’s family. An annual bonus was paid for school improvements.

A young girl, perhaps John’s granddaughter Beryl, is ‘playing pretend’ doing the washing with with a child-sized washtub and wooden wringer. Tabby the cat is outdoors with her. Bexley, circa 1904. Stereograph – Preparing to wash (2000-909)

The Middenways had a cat named Tabby and a dog called Trim. The children played music and sang – Frank was a flautist and Ada became a gifted contralto. The little ones played pretend games, like granddaughter Beryl doing the washing to prepare her for her future role in life. Leaning against the child-sized wheelbarrow and the bucket that was used to bring the water from the pump is a porcelain-faced stuffed doll whose clothes are already hung out to dry on the clothesline hand-tied to the fence.

Some of the Middenway children sweep and roll the clay tennis court, probably at their father’s school. Probably Grace holding baby John watching Gerritt and Ada and a friend. Probably Wagga Wagga, circa 1893. Stereograph – Getting the tennis court ready (2000-905)

But children also had family duties beyond their schoolwork. When tennis became popular throughout the British Empire in the 1880s, many public schools started creating their own clay courts. Here probably Grace is holding baby John (‘Jack’) in 1893, watching Gerritt rolling out the court, while it looks like Ada has her racquet ready to play. Perhaps a friend with the broom, the girls are wearing pinafores so their dirty work won’t mark their everyday clothes.

John (Jack) Middenway seated on the left with his dog Trim with friends or relatives. They are all dressed in their ‘Sunday best’ suggesting a visit by the girl and boy. Bexley, circa 1900.  Stereograph – Bexley (2000-902)

After all his rural appointments, finally John Saunders Middenway was rewarded with appointment as headmaster of Bexley Public School in Sydney in 1895. This was a swap of position with the other principal, both of them moving to improve their health. There he remained for the next 22 years. He moved with Sarah and his two youngest children as the others were grown up.

Adult son Frank with his wife Betsy on an outing to the beach with his parents and younger siblings. Grace is seated on the left and John (Jack) is watching the horses. The horses are cooling off after transporting the ‘pleasure parties’ from town. Lady Robinson Beach, Sydney, circa 1900. Stereograph – Lady Robinson’s Beach (2000-915)

Frank Middenway, the eldest son, followed his father as an active and able teacher in Norfolk Island, Como, Brighton Le Sands, Guildford and Kelso Public Schools. He became a keen cyclist, played the flute, was a devoted Freemason and was also a skilled photographer of single lens and stereoscopic images.

In 1900 he married Betsy Daley of Wagga, where they had both grown up. This looks like them in the stereograph on an outing at Lady Robinson Beach in Sydney. At the time, daylight swimming was prohibited.

Frank and Betsy went on to have four daughters and a son. They were based in Kelso, near Bathurst, from 1908 to 1915.

World War 1 and beyond

John Saunders Middenway may have chosen to retire at 60 but with loss of staff during the Great War he was kept at Bexley until 1917. When he arrived, the school had 200 pupils but by the time he retired there were closer to 1000. At his farewell from Wagga, he told them he had wished to be his students’ friend as well as their teacher, but when he took leave of Bexley after 48 years of teaching, he said he had wanted to be their father too.

Life as a father at that time must have been a challenge with his sons’ involvement in the war: Frank was a captain with Home Service and in 1915 Arthur enlisted in the British army and John in the Royal Navy.

John Saunders Middenway worked for his community as teacher and volunteer, he raised a family who were likewise honest, hardworking and lived by the ideals of their community. He lived to enjoy the enormous respect and gratitude of the many people he had devoted his life to teaching. He died in 1931, Sarah following the year after.

John Saunders Middenway managed to achieve ‘immortality’ in three ways:  as a father, teacher and as a photographer whose images give us his vision as a permanent record of the times in which he lived.

Inside our Museum – Stereoscopes and Stereographs, Moruya and District Historical Society 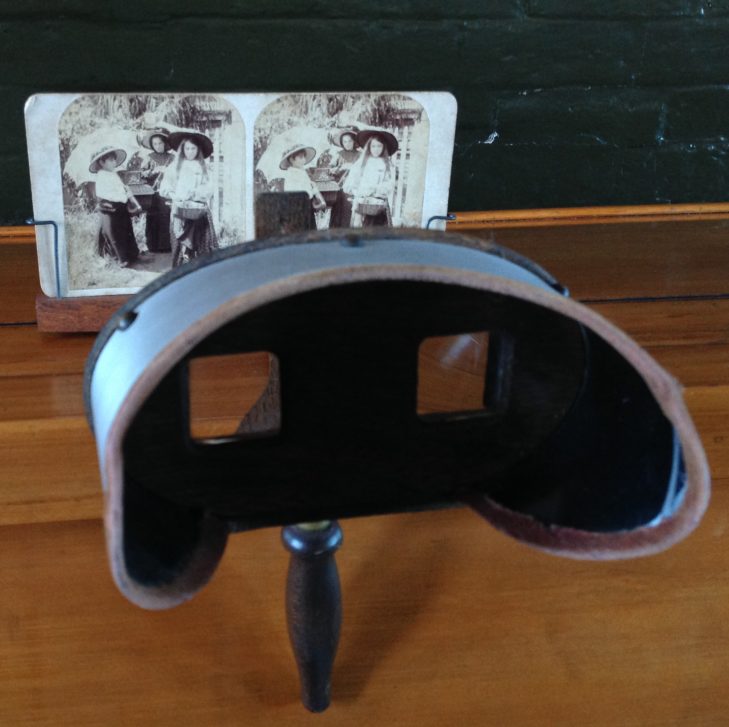 Stereoscope, circa 1890. Held against the face, the two lenses magnify the image and create an enlarged 3D view

The most popular stereoscope viewer in Australia was the Holmes Stereoscope, developed by American Oliver Wendall Holmes in 1861. It wasn’t patented so produced in varying styles.

The dual images were captured using stereo cameras that had two lenses set beside each other to replicate two eyes. 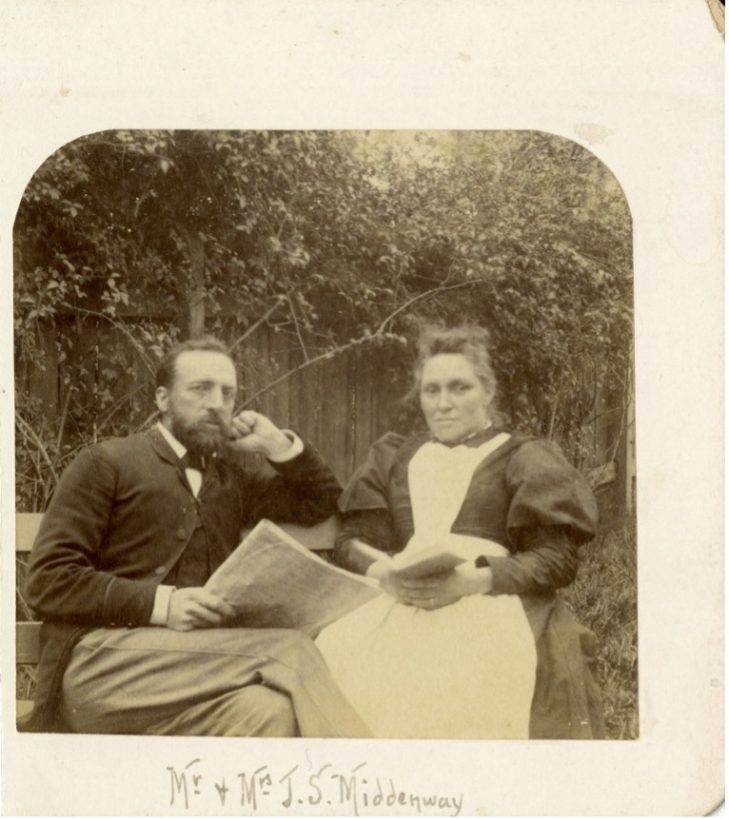 John and Sarah Middenway, circa 1895, probably at Bexley

John was the third son of Gerritt Hendrick Middenway and Anna Maria Cox.

Sadly tragedy struck the family in 1875. John was called in to identify the body of his father following a fatal casualty of a machine accident at the Sydney Morning Herald. 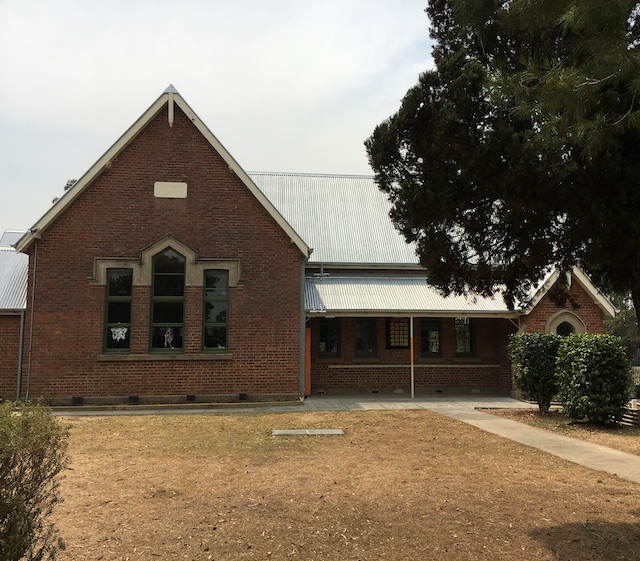 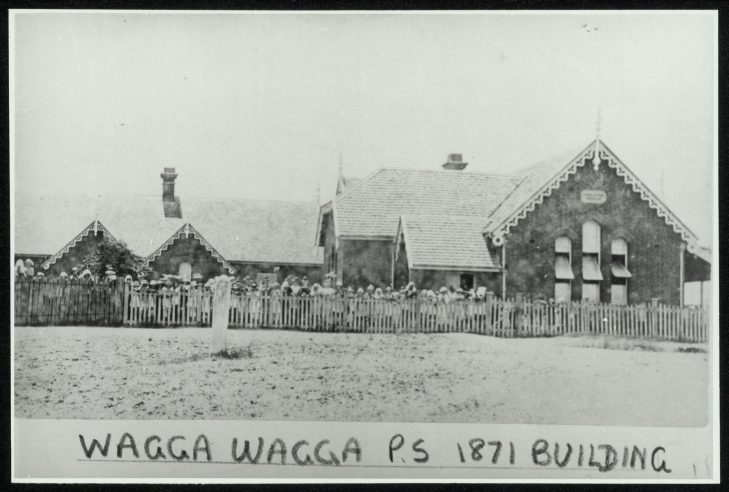