The Gould League of Bird Lovers was named after English naturalist John Gould who researched Australian birds between 1838 and 1840. His wife, Elizabeth, a natural history artist, drew them. The Gould League was immensely popular with the children of NSW.

In the early years, members would pay one penny each year, or a shilling for adults. In return, they received a membership certificate. These were postcard-sized from 1931 and illustrated in full colour with paintings of native birds. Prior to this, they were larger in monochrome green, then brown.

The League’s aim was to protect native birds by reducing the collection of birds’ eggs. On joining, members agreed to the pledge:

I hereby promise to protect all birds except those that are noxious and to refrain from the unnecessary collection of wild birds’ eggs.

From 1928 members could also buy a badge featuring a native bird, a different one each year. These were intended for adults but were very popular with children. Originally costing a shilling, in the early 1950s they cost 1/6 – one shilling and sixpence. Oh, the anticipation waiting for that badge to finally arrive!

Founding of the NSW Gould League

On the first Bird Day in October 1911 a celebratory concert was held – the anniversary of when young teacher Edward Webster and headmaster Walter Finigan had stood under a tree in the playground of Wellington Public School in 1910 and decided to launch a Gould League of Bird Lovers in NSW. These co-founders wanted to emulate what Jessie McMichael had started in Victoria the year before.

At Wellington, where the League had been born, Maggie May from Nanima Aboriginal Reserve won a book in 1912, 2nd prize of 5 shillings in 1913 and 1st prize of 10 shillings sixpence in 1914, aged 12 ½,  for her story ‘An Autobiography of a Jacky Winter’.

In 1936 there were no less than 12 individual bird related competitions with two sections just for adult members. The student competitions asked them to write essays, produce drawings or photographs and complete reports on local bird activities.

A special section awarded a prize of an inscribed Gould League Merit Badge to a member who ‘can induce any Australian Native Bird, other than a pet bird, to alight or perch on his or her person.’ The claim had to be accompanied by an official statement of truth.

At least until the 1960s the League’s president was a high-ranking officer of the NSW Department of Education, originally the Chief Inspector of Schools and then the Director-General of Education. The Education Gazette encouraged teachers to motivate and support their students’ active participation in bird study and Gould League activities. Special certificates were provided for schools with one hundred percent membership, listed as honour rolls in the magazine, Gould League Notes. The Gazette listed details of competitions and prizes as well as resources for teachers.

Generations of Australian students were introduced to an appreciation of the natural world through participation in Gould League activities. By 1918, when the first generation of Gould League members were voters, the Birds and Animals Protection Act was passed, followed by the Fauna Protection Act 1948 and the National Parks and Wildlife Act 1967. In 1965 the League’s slogan was ‘Conservation is everybody’s business’.

In 1967  the NSW Gould League merged with the NSW Young Tree Wardens and dropped ‘Bird Lovers’ from its title. Its aim broadened to conservation and environmental education. It aimed “to promote a healthy attitude toward, and an awareness of, the importance of all aspects of conservation and stimulate interest in the preservation and study of most forms of natural life”. (Gould League of NSW minutes, 26 September 1967 in Tribe and Roberts 2011).

The Gould League of NSW’s new pledge was:

Earth is our home and I promise to try to keep it beautiful by learning to understand and conserve its soils, air, water, natural beauty and all its living things.

The League played a major role in establishing field studies centres in NSW. It helped to establish one at Wirrimbirra, Bargo, and funded a classroom at Longneck Lagoon Reserve. The League also played a role in establishing Muogamarra Field Studies Centre north of Cowan in 1971. The League had a spot on children’s television, the Super Flying Fun Show, and launched the Project Environment competition for K-12 students through the Sydney Morning Herald in 1973.

A century of nature conservation education

With a network of 25 NSW Department of Education environmental and zoo education centres successfully running,  and in a world of digital resources, the Gould League of NSW closed in 2010. The Gould Leagues of Victoria and Western Australia still remain active today. 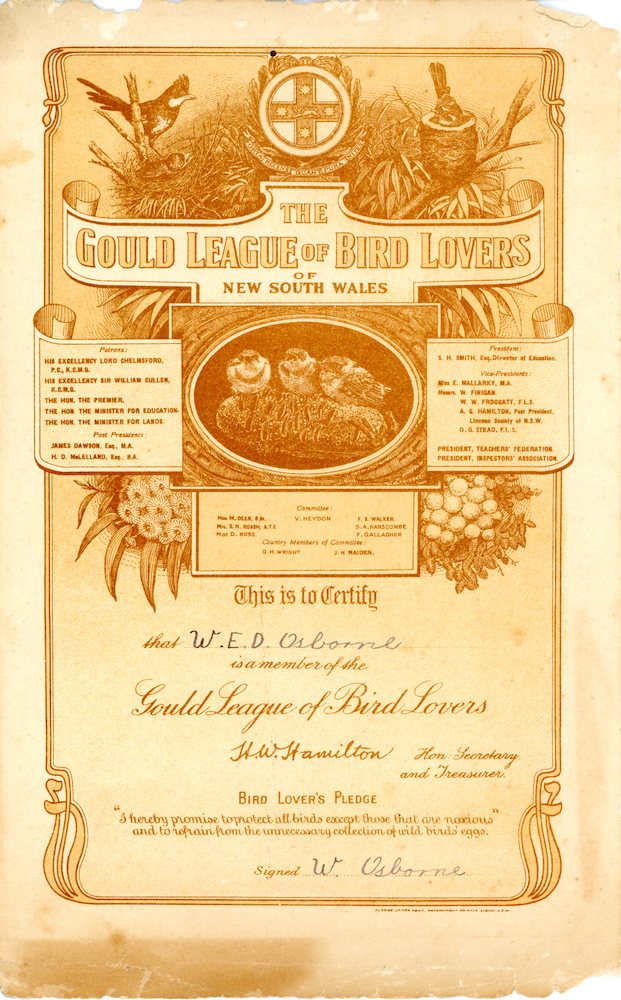 The first membership certificates were quite large and monochrome, originally green and then brown.

The illustrations of birds are drawings are of a Whipbird and a Grey Fantail at their nests and three young White-fronted Chats posed on a banksia cone. 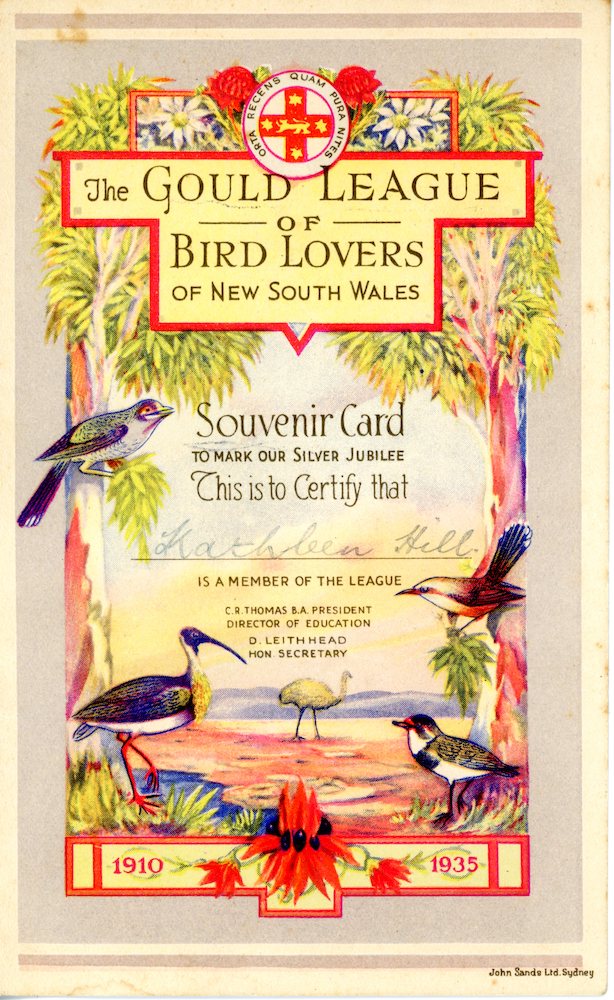 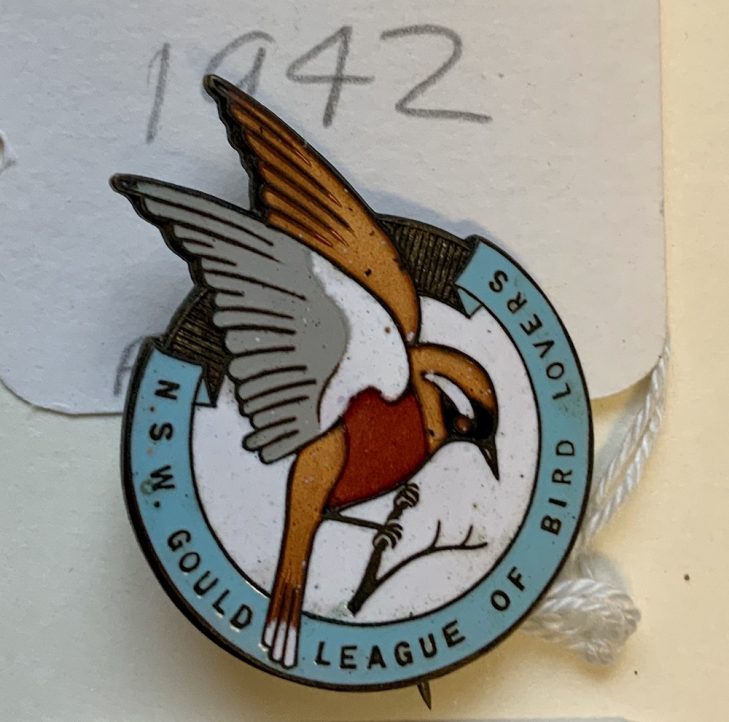 This 1942 membership badge features the White-browed Wood Swallow. A different bird featured on each year’s badge. 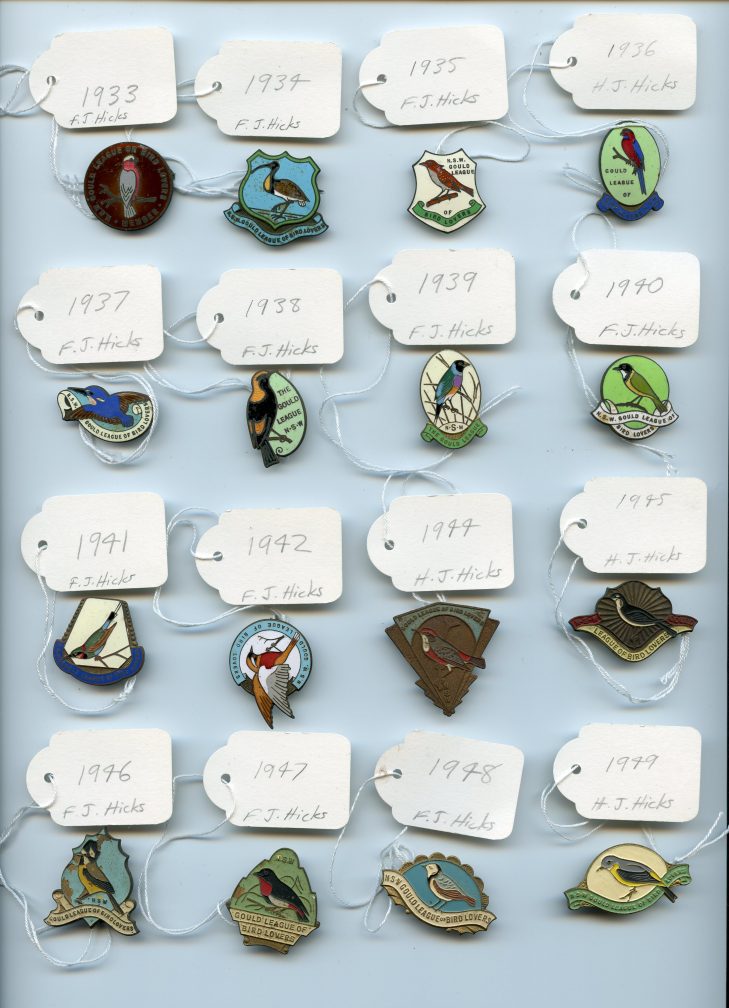 View a complete set of badges 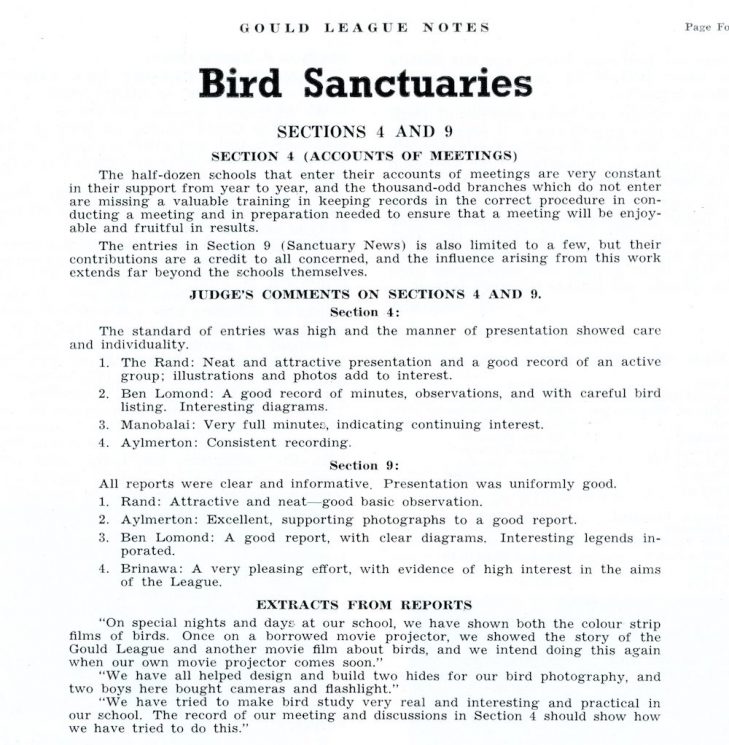 Under the Fauna Protection Act of 1948, the area within a mile radius of any school was a sanctuary.

The Gould League encouraged students to install bird baths and feeding stations to provide a safe haven for native birds within these areas.

Schools submitted reports on their meetings and activities on bird life in their sanctuaries. 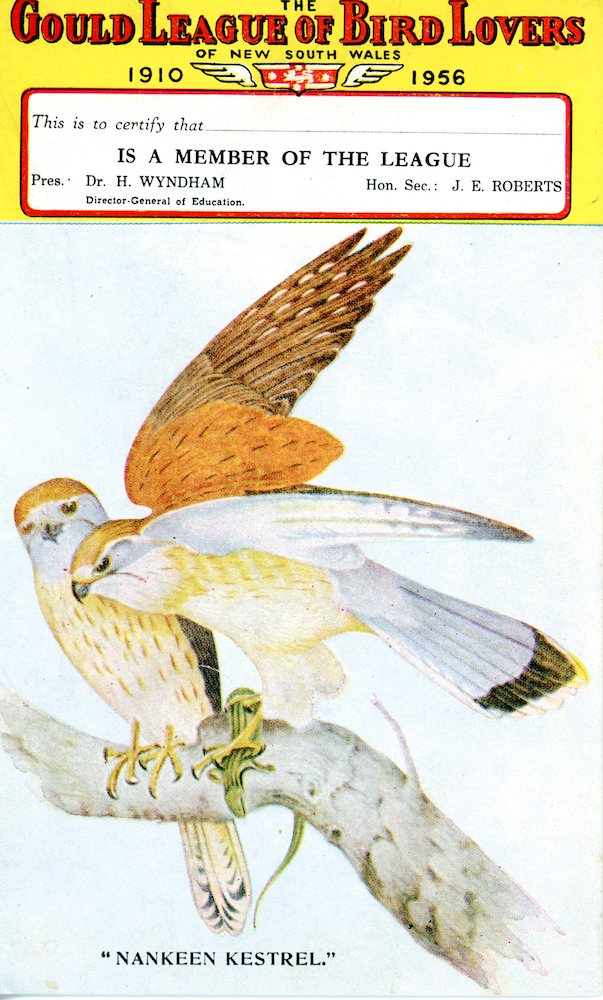 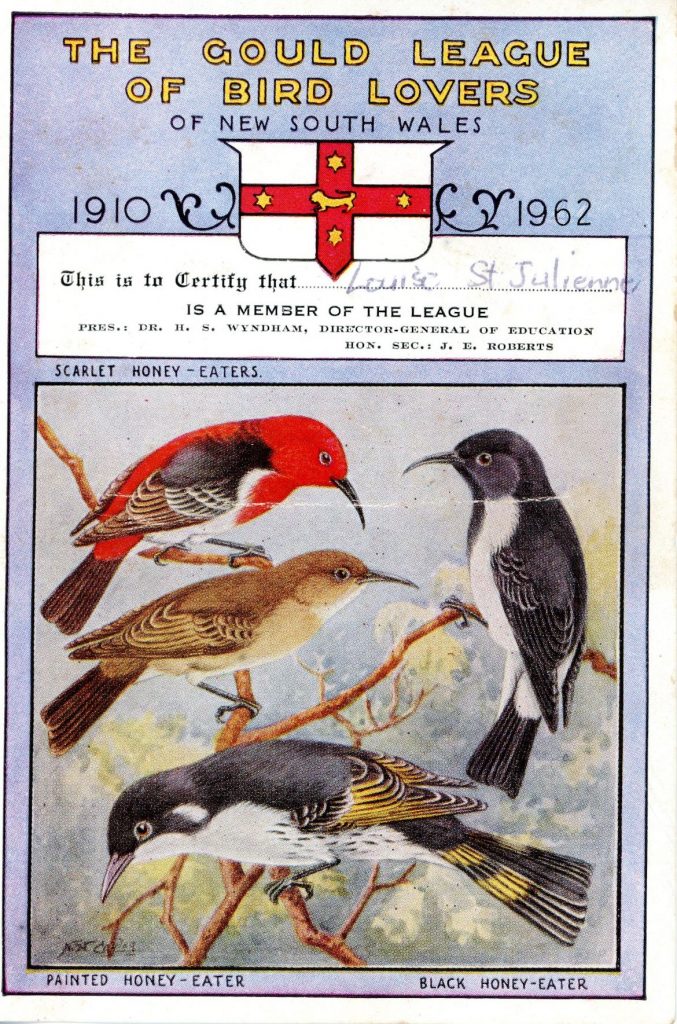 The certificates of the 1950s and 60s continued to be postcard sized but were produced in portrait instead of landscape. 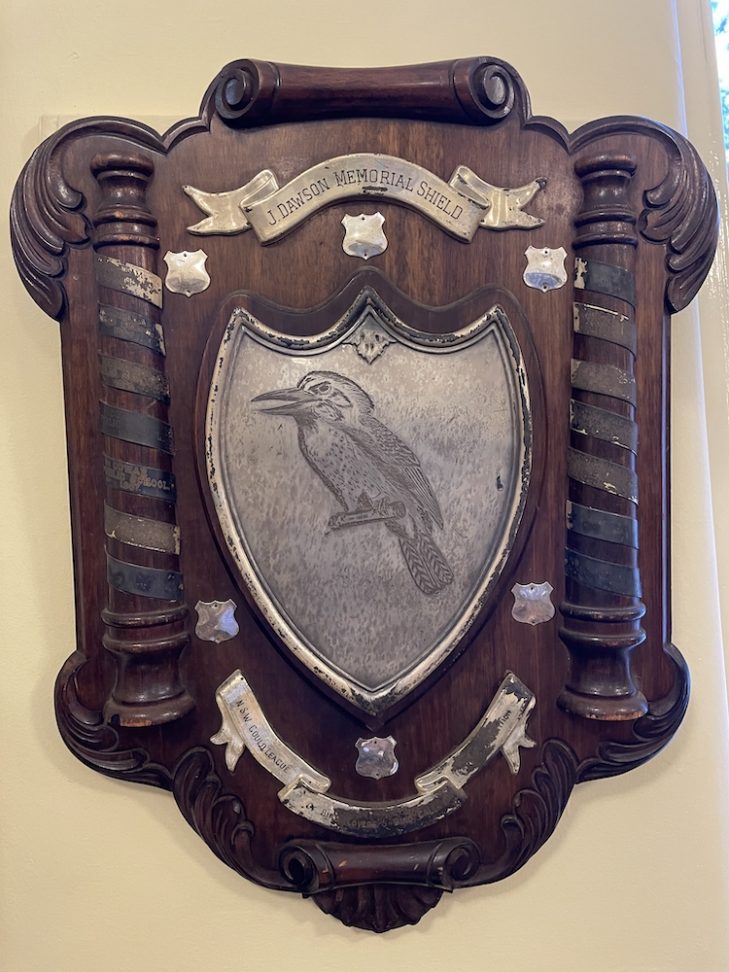 The bird call imitation competition was held on Bird Day in October each year at the Sydney Town Hall.

Country students travelled to Sydney and were billeted by city students. 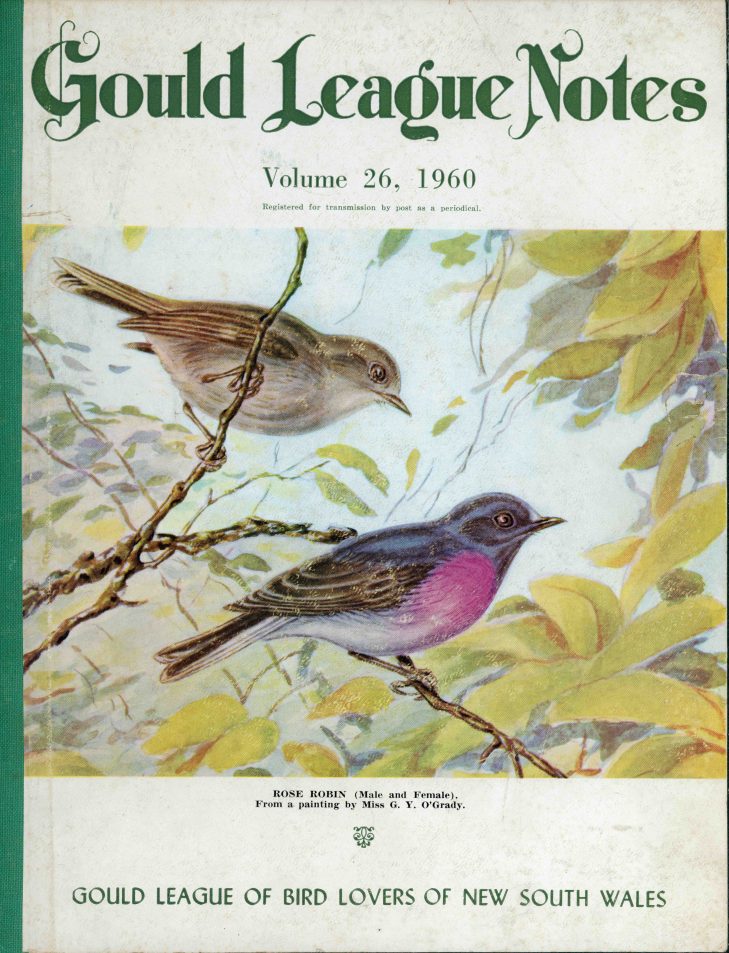 Gould League Notes, Volume 26, 1960, the magazine of the Gould League of Bird Lovers of NSW

Gould League Notes was published from 1935 with information on birds and their habitats, competition entries and results. It became The Gould Leaguer in 1967 with a broader environmental education focus. 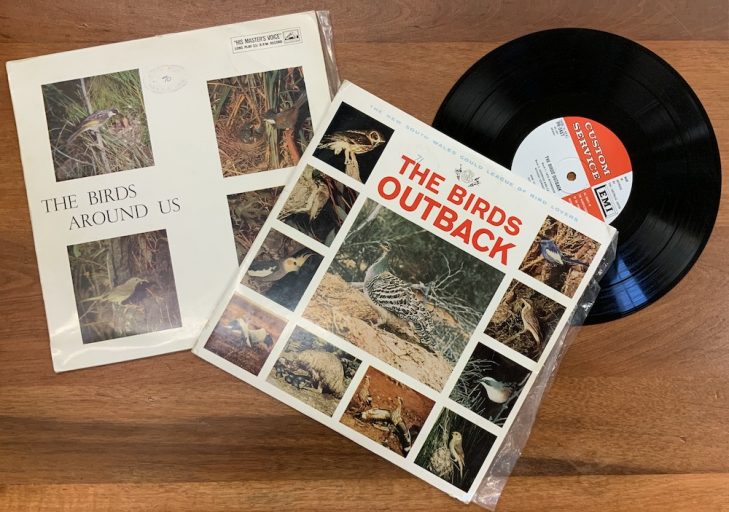 The Birds Around Us and The Birds Outback LP records, Gould League of Bird Lovers of NSW, circa 1965

In the 1960s the League produced records of bird calls and filmstrips as teaching resources. The filmstrips were titled Birds of the Blossoms, Birds of the Field and Garden, Sea Birds and Black Swans. 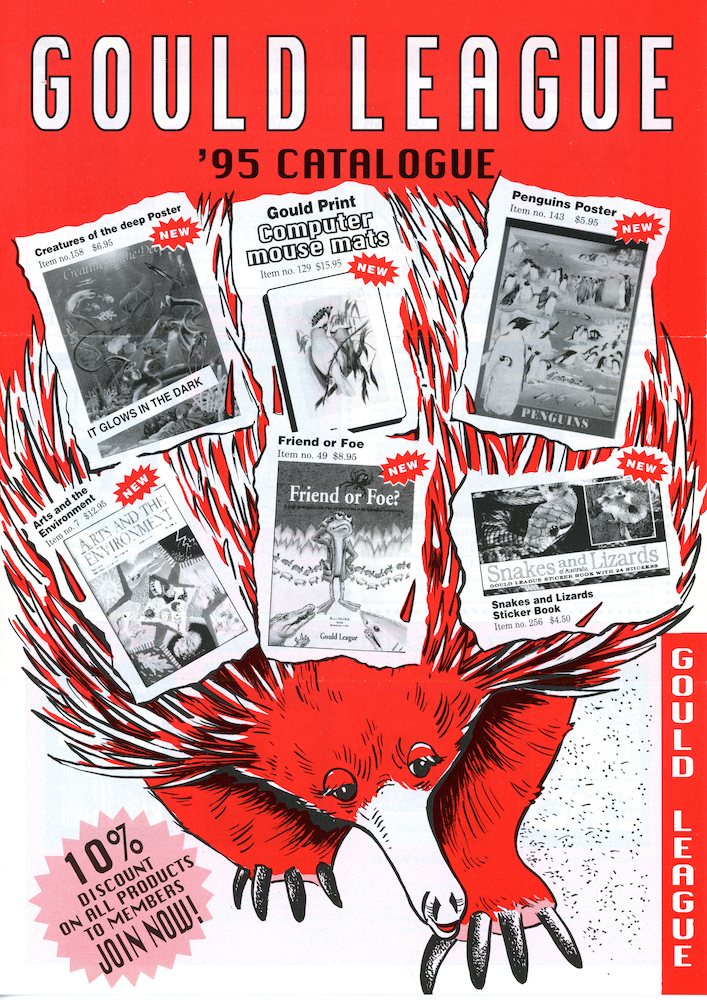 1995 catalogue of posters and resources produced by the Gould League